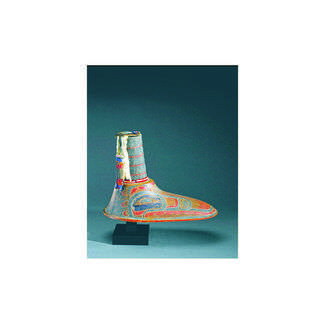 A ceremonial hat from the Wrangell Kiks.ádi tribe was set to go before the auction gavel in New York Wednesday.

The potential auction of a priceless heirloom has galvanized tribal leaders, who say the hat never should have been sold in the first place. A rally with traditional singing and dancing was planned for Wednesday evening in Juneau. A crowdsourcing campaign to try and reclaim the hat had raised more than $21,000 in three days.

The hat was carved by master Tlingit carver William Ukas sometime in the last century (Ukas’s son Thomas carved the Wrangell Post Office totem pole based on his father’s design). It’s style of construction appears different from other cedar hats seen in traditional ceremonies in and around Wrangell, which are typically round and low-brimmed. The hat’s shape instead resembles a traditional Aleut hat, with a long, low brim used for hunting and fishing on open water, though the artwork and embossments are pure Tlingit. It contains three potlatch – or ku.éex – tiers topped by an abalone crest.

Photo courtesy www.sothebys.com
The Sotheby’s auction website shows Lot 88 with a description. Native organizations across Southeast mobilized Tuesday and Wednesday to try to reclaim the hat for the Wrangell Kiks.áadi clan.